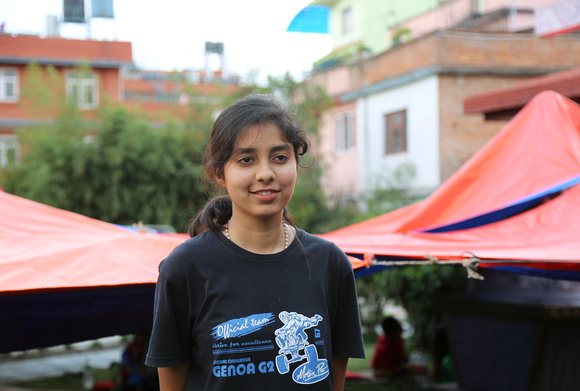 Patan, Kathmandu, Nepal after a 7.8 magnitude earthquake struck Nepal and India on April 25, 2015.

Qurnain, 15 years old, is staying at the Assumption Church with her family.

“When the earthquake happened, I was reading a book and my brother was playing on the internet. At first we thought it was the wind, then everything was shaking and my brother shouted it was an earthquake. My mother was in the toilet, we knocked on the door and called out. She was taking a bath, so she said to go ahead first into the street.”

“I felt scared and about to die [when the earthquake hit]”

“Now later I feel everything is going to be alright.”

“We came to the church because we know a lot of people here so we can be together and coordinate and help each other out."

Her brother Ahmed said he “felt as if I was flying because my elder brother dragged him from the house to the street.”

CRS, Caritas and its local partners are responding with much needed relief in the affected areas.