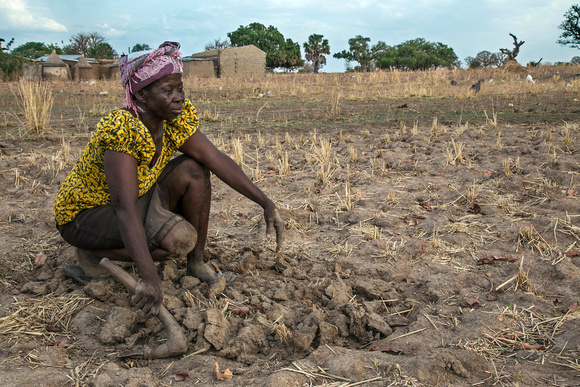 Monica Aluko (53) is one of many people in her village of Awaradone who used to rely on farming for their livelihood but can no longer do so because of changing weather patterns.

Awaradone in the Talensi District of the Upper East Region in Ghana is one of several communities that were affected by severe floods and draught in 2007. Farming in the community is extremely dependent on the climate, making it susceptible to rain and weather patterns and the availability of land in the face of increasing population. Having lost crops and livestock with no forest for community members to fall on for wild fruits as a coping strategy, women in the community found alternative livelihoods to make life easier for their families. Many of the women started weaving straw hats and baskets using straw harvested from fields around the community. With very little straw and no money to buy extra straw from the market they could make and sell only one or two straw hats or baskets at a time.

CRS introduced SILC in the community, and women now take loans from the SILC groups to purchase large quantities of raw material to make many baskets before selling. Some of the women have also diversified into rice and shea butter processing and piggery. With a high level of illiteracy among women in the community, SILC members now access loans from their groups to ensure their children are enrolled in school as the land no longer promise a good future for them.