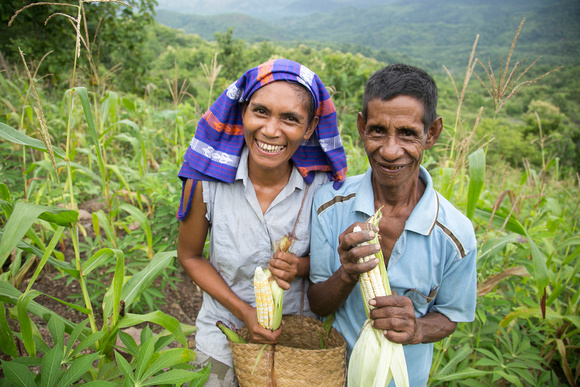 Agnes Tai, 34, and her husband Blasius Meak, 56, were extremely poor farmers in an isolated village before they began employing new agriculture techniques they learned in the SAfER project. Now, they have a good variety of vegetables and corn as a staple crop, and they still had a harvest in 2016 during an extremely dry El Nino year. Other families lost their entire corn crop, but Agnes and Blasius have enough to feed their 5 children and sell excess for income.

The project is funded by the Mac Foundation and is particularly relevant in the eastern part of Indonesia as it faces changes in quantity and timing of rainfall, leaving all crops vulnerable to drought. Strong winds that destroy corn crops planted in a traditional way are another new challenge for mountain farmers. The project’s success is even more visible in 2016 as the El Nino weather phenomenon has exacerbated climate change trends. Rains came 3 months late and were minimal for the first 2 months. Farmers who used new techniques were able to have a harvest, although smaller than normal. Farmers who planted in a traditional way lost their entire corn crop and must make difficult choices about how to cope.